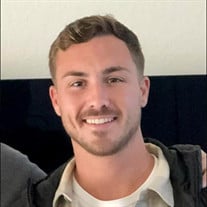 Avery Philip Mottet, 28, passed away at his Ellensburg home on Monday, May 3, 2021. The family will greet friends at a visitation from 4:00-8:00 p.m. on Monday, May 17 at Johnston & Williams Funeral Home, 301 E. Third in Ellensburg. A memorial service will be held at 11:00 a.m. on Tuesday, May 18 in the chapel of Valley Hills Funeral Home, 2600 Business Lane in Yakima and live-streamed at www.johnston-williams.com. Avery will be laid to rest at 1:00 p.m. that afternoon at Terrace Heights Memorial Park. Avery was born on February 2, 1993 in Yakima, Washington to Christopher & Nancy (Anderson) Mottet. He grew up in Selah and graduated from Davis High School with the class of 2011. Following graduation, Avery attended Washington State University in Pullman where he pursued his degree in Construction Management and was a member of the Delta Chi Fraternity. After taking a break from college, Avery transferred to Central Washington University last year to complete his degree. From a young age, Avery’s athletic ability shined through to those around him. Avery’s love of the outdoors led him to downhill skiing, snowboarding, and downhill mountain biking quickly mastering all three. In September, Avery became a parent to Brodie, now a 9-month old Australian Labradoodle. Although shy at first, Avery was a very kind and loving person who will be dearly missed by those who knew him. Avery is survived by his dog, Brodie; his parents Chris & Nancy Mottet of Ellensburg and Selah; brother Caleb Mottet of Selah; and grandmother Dorothy “Val” Mottet of Yakima. He is also survived by numerous aunts, uncles, cousins and dear friends. He was preceded in death by his grandparents Dan & Claire Anderson of Seattle and Bill Mottet of Yakima. Memorial contributions in Avery’s honor are suggested to the Yakima Humane Society, 2405 W. Birchfield Rd., Yakima, WA 98901.

Avery Philip Mottet, 28, passed away at his Ellensburg home on Monday, May 3, 2021. The family will greet friends at a visitation from 4:00-8:00 p.m. on Monday, May 17 at Johnston & Williams Funeral Home, 301 E. Third in Ellensburg. A memorial... View Obituary & Service Information

The family of Avery Phillip Mottet created this Life Tributes page to make it easy to share your memories.

Avery Philip Mottet, 28, passed away at his Ellensburg home on...

Send flowers to the Mottet family.