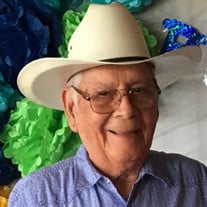 On Tuesday, February 15, 2022, at 7:19 am, our father Amador “Louie” Morales was called home by the good Lord, at 93 years old.  Louie was born on September 15, 1928, to Eucebio and Marina Morales in Waxahachie, Texas. He was not only a father but a loving son, husband, grandpa, brother, uncle, and friend. He was preceded in death with open arms by his parents, his beautiful loving wife Josephine Morales (Vasquez), his daughter Marisella “Chella” Lee Morales, his son LeRoy “Lee” Pedro Morales, Joseph Morales, twins: Jesus & Guadalupe Morales, Mark Morales, Anthony Morales, and grandson Robert Moreno Jr; as well as his seven siblings Jesse (Mary) Morales, Frances Morales, Augustina (Albert) Varela, Clemente (Rosie) Morales, Victoria (Tony) Saldivar, Merardo Morales, and Helen Acosta Morales.  He is survived by his children Anita Maria Morales, Michael Luis Morales (Rose), Mario Eucebio Morales, Cecilia Jo Morales, Sylvia Mae Moreno (Robert Sr.), 23 grandchildren, 51 great grandchildren, 21 great great grandchildren, many nephews, nieces, friends, and others that he opened his home to.  Our father was a strong, hardworking, Catholic man that valued his family, friends, and his integrity.  He will be remembered by the values and “morales” he instilled in each and every one of us, from his children down to his great great grandchild.   Our father’s legacy began in Texas, where his strong work ethic emerged. He worked alongside his father, at the age of 8, as a water boy and then as a spiker for Burlington Railroads.  Soon after, he and his family migrated throughout the United States, settling in Wyoming to labor and harvest the local lands and crops.  At the young age of 14 he traveled independently to Washington state, with $3 in his pocket, seeking a better life for him and his family. With determination and strong will he made it to Wapato, where his family later joined him.  From 1942 to the early 1950’s he worked various farms throughout the Valley.  During this time, he met the love of his life, Josie, married her on April 22, 1950, and then started a family shortly after.  In 1951 he secured a foreman position with Gasseling and Sons Ranch, where he worked for 47 years and retired at the age of 70.  Additionally, in the early 1960’s, our father ran his own truck hauling company, “Morales Trucking”; where he mainly hauled potatoes. Although he was a hardworking man, he dedicated time to his family, religion, and his home.   Our dad, Louie, enjoyed taking his children and grandchildren to rodeos, PBR’s, parades, carnivals, and he especially loved kicking up his boots on the dancefloor.  He loved riding passenger on road trips, the length of the trip didn’t matter, he just loved being with family.  His radiating smile and sense of humor lit up a room and will be deeply missed.  If he told you a bad joke or gave you a compliment (good or bad), you know he loved you!  We’ll see you tomorrow dad, “SI DIOS QUIERE”.    A special thanks to Dr. Camelia Wogu and the CICU at the Toppenish Community hospital from the Morales family, for taking care of our dad/grandpa like he was your own. Funeral arrangements by Valley Hills FH-Wapato: Following COVID regulations. 02/25/2022-4pm to 6pm Viewing for immediate family/walk through for all others 02/26/2022-11am Mass Wapato Saint Peter Catholic Church and Burial immediately after (Wapato cemetery) Please wear a mask and social distance!

The family of Amador "Louie" Morales created this Life Tributes page to make it easy to share your memories.

Send flowers to the Morales family.